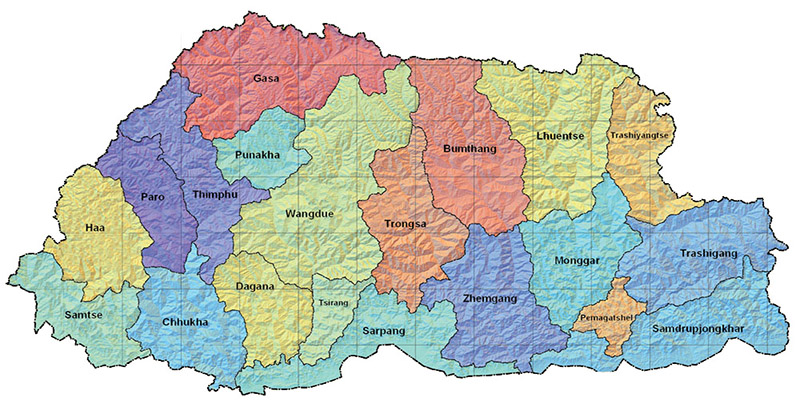 The Buddhist Kingdom of Bhutan lies along the lofty ridges of the eastern Himalayas, bordered by China (Tibet) to the north and northwest, and by the Indian states of Arunachal Pradesh, Assam, West Bengal and Sikkim on the east, south and west respectively.

With an area of 38,394 square km., Bhutan is comparable to Switzerland both in its size and topography. The mighty Himalayas protected Bhutan from the rest of the world and left it blissfully untouched through the centuries. The Drukpa Kagyupa school of Mahayana Buddhism provided the essence of a rich culture and a fascinating history. The Bhutanese people protected this sacred heritage and unique identity for centuries by choosing to remain shrouded in a jealously guarded isolation. The kingdom is peopled sparsely, with a population approaching 552,996. Opened for tourism in 1974, after the coronation of the fourth King, His Majesty Jigme Singye Wangchuck, Bhutan is perhaps the world’s most exclusive tourist destination. The country still retains all the charm of the old world, and travelers experience the full glory of this ancient land as embodied in the monastic fortresses, ancient temples, monasteries and stupas which dot the countryside, prayer flags fluttering above farmhouses and on the hillsides, lush forests, rushing glacial rivers, and – perhaps most important of all – the warm smiles and genuine friendliness of the people. Each moment is special as one discovers a country, which its people have chosen to preserve in all its magical purity 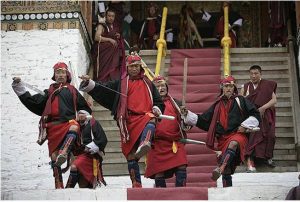 The history of the kingdom dates back to the 8th century, with Guru Padmasambhava’s legendary flight from Tibet to Bhutan in 747 AD on the back of a tigress. The Guru began propagation of the Tantric form of Mahayana Buddhism. The country was unified under the Drukpa Kagyupa sect of Mahayana Buddhism in the early 17th century, by the religious figure, Shabdrung Ngawang Namgyal. The Shabdrung codified a comprehensive system of laws and built dzongs which guarded each valley. At the end of the 19th century, the Trongsa Penlop, Ugyen Wangchuck, who then controlled the central and eastern regions, overcame all his rivals and united the nation once more. In 1907, Ugyen Wangchuck was unanimously accepted as King, and a hereditary monarchy system was unanimously agreed for Bhutan. In 1998, the fourth King stepped down as head of state and handed over this function to a prime minister assisted by a cabinet of ministers. As part of the move towards democracy, the fourth King handed over his responsibilities to his son King Jigme Khesar Namgyal Wangchuck in 2006. In 2008, the year that marked the centenary of the Kingdom, Bhutan made the transition from an absolute monarchy to a constitutional monarchy and held its first general elections, marking a new era in the political history of Bhutan. 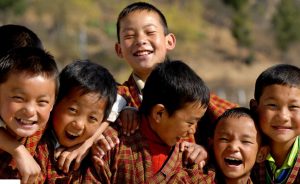 Three decades ago, the term Gross National Happiness (GNH) was coined by the fourth King His Majesty Jigme Singye Wangchuck. The concept of GNH was articulated to indicate that development has many more dimensions than those associated with Gross National Product. The GNH philosophy places the individual at the centre of all development efforts and thus recognizes that people not only have material needs but also spiritual and emotional needs as well. It asserts that spiritual and emotional needs cannot and should not be defined exclusively in material terms. GNH is an economic and development philosophy that serves Bhutan’s unique culture based on Buddhist spiritual values.

The three climatic zones of the foothills, central Himalayan valleys and the high Himalayas makes Bhutan’s natural heritage more rich and varied than other Himalayan regions. In historical records, the kingdom is referred to as the “Southern Valley of Medicinal Herbs”, a name that still applies to this day. The country’s flora consists of over 7000 species of plants, including the rare Blue Poppy which is also the national flower. Bhutan also has a reputation for being a birdwatcher’s paradise with over 675 species of birds including the endangered Black-Necked crane. Because of the deep traditional reverence, which the Bhutanese have for nature, the kingdom is one of the leading countries in environmental conservation. Over 70% of Bhutan’s land area is still under forest cover. Many parts of the country have been declared wildlife reserves, and are the natural habitats of rare species of both flora and fauna.

Bhutan is the only extant Mahayana Buddhist kingdom in the world that has adopted the Tantric form as its official religion. A majority of the Bhutanese people are Buddhist while people of Nepalese and Indian origin are Hindus. The teachings of this school of Buddhism are a living faith among its people. The air of spirituality is pervasive even in urban centers, where the spinning of prayer wheels, the murmur of mantras and the glow of butter lamps are still commonplace features of everyday life. Bhutan’s religious sites and institutions are not museums, but the daily refuge of the people.